As mentioned in my intro to board games last week, I first dipped my toes into the pool of strategy board games with Dominion.

Categorically, Dominion is a deck building game. Thematically, it transforms you into a medieval monarch racing to collect land before your peers can lay claim. Introduced in 2008, this 2009 Spiel des Jahres winner is noteworthy not only for its fun factor, but also because designer Donald X. Vaccarino actually invented the deck building mechanism. Seriously. If you, like me, are fascinated with this kind of something-from-nothing creativity, I highly suggest reading his thoughtful article on the origins of Dominion.

For beginners, I’ll start with the basic mechanics of the game. For people who have already played Dominion and are just here for my pretty pictures and review, feel free to scroll ahead for my final thoughts.

The goal of Dominion is to buy and use treasure (money) and kingdom (action) cards to acquire land (victory point) cards: Estates (1 point), Duchies (3 points), or Provinces (6 points). The game ends immediately when all Province cards are gone or when any three card piles are empty.

The following image demonstrates the setup for a two-player game. 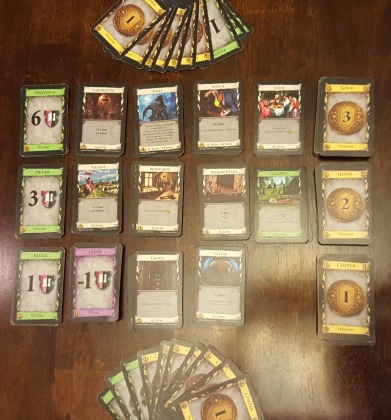 As shown above, the “supply” refers to all of the cards in the middle of the table, between both fanned-out hands. The green cards to the left (read the designer’s interview above to learn why they are green!) are the land (victory point) cards. The gray cards with illustrations are kingdom (action) cards. The gold cards are the treasure (money) cards.

Kingdom cards come in a few flavors. Some are straight action cards, some are action-attack cards (like the dreaded Witch, who gives you curses), one is an action-reaction card (the Moat, which protects you if in your hand when being attacked), and one is actually another victory card (Gardens). There are 25 different types of kingdom cards in all.

To begin, players must choose 10 sets of kingdom cards (of which there are typically 10 cards each). The rule book has a great recommendation on which cards to use for the first game and suggestions for subsequent games as well. After you start to get a feel for the different cards and how they interact when played together, I suggest using an online Dominion card randomizer. That way, you can input which expansions you have, if any, to help you get the most out of your Dominion experience.

In the above picture, you’ll also see a purple card. This is a curse card (and, in this example game, was the bane of my existence). Though used with other cards in the expansions, the Witch is really the only card in the base set that requires the curse card.

Each player starts the game with minimal resources: just seven coppers and three estates. Each player must take his or her cards, shuffle them, and place them face down. These face-down cards are the player’s deck.

For each turn, a player will draw five cards from the deck to form her hand (let’s use feminine pronouns today, shall we?). Even as she procures more cards, she will always deal five cards to form her hand. More cards may be called into play depending on action cards used, but we will get to that in a second. After she is done with her turn, the player will discard her hand to a face-up discard pile.

Unless you must “trash” something, your cards are yours until the end of the game; they are not consumed like in other games. This includes treasure cards. Once your deck is empty, you shuffle your discard pile and start again.

There are three parts to each turn:

While players can plan privately, they must lay their hands down and show their cards as they play their turns. It keeps that player honest and organized and helps the other players stay engaged. 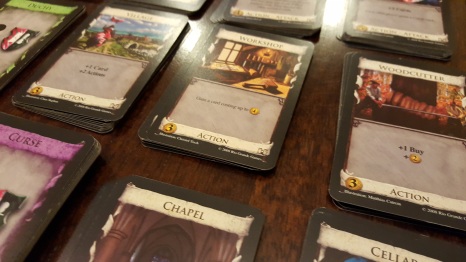 Each kingdom card has a rather complex and beautiful illustration. It also says what that card actually does. 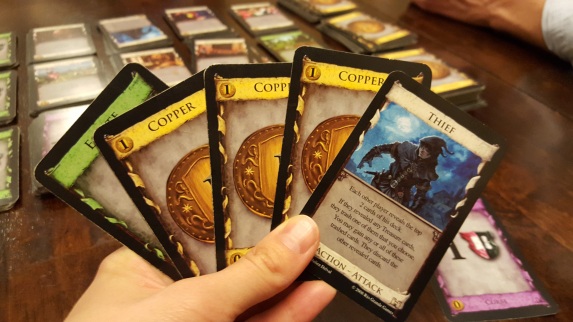 Early in the game, you will have a small deck. That means two things: 1. Your three Estates will pop up frequently and dilute your hand. 2. You will have to reshuffle your discard pile quite frequently. So if you want to really get full use out of a particular action card, you may want to buy it early on so you can actually use it a lot (without waiting for the entire deck to run out).

My standard Dominion strategy is to load up on treasure cards. This almost always helps me win because I’m able to buy Province cards before anyone else can afford them. However, you have to be careful when you use that strategy because cards like the Thief allow your opponents to steal your treasure cards. In this particular game we did not include the only real defense card, the Moat, so I was forced to choose Papa Bear’s favorite strategy: buying a lot of action cards. 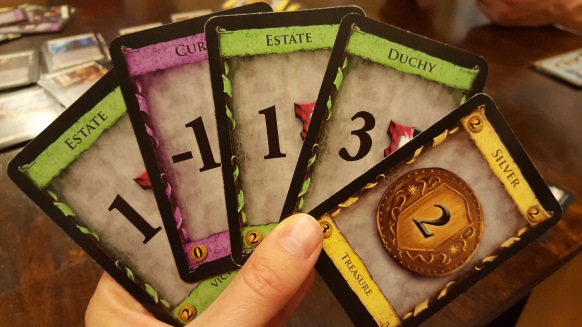 This is the kind of hand I dread since it is almost entirely diluted with victory points (and a curse). I have no action cards, and there are only a few cards that only cost two monies, so I cannot do much.

Any time you have eight or more monies, BUY A PROVINCE CARD. Even if you have 11 monies and only one buy. Trust me.

My final tally for this game. Unfortunately my opponent’s Thief stole too much of my money for me to recover in time. It wasn’t that big of a point difference, but it did remind me that I need to vary my strategy occasionally when the cards are what they were.

Dominion will always hold a special place in my heart because we received it for our wedding and because it was what made us interested in exploring the world of strategy games. But I’ve said that. So what else do I think?

It’s pretty obvious, but I would highly recommend playing Dominion if you haven’t already. It’s an easy-to-learn, fast-to-play option for experienced board gamers and newbies alike. It’s the kind of game that we play whenever we’re not sure what else to play because: 1. It’s short; 2. We know it will be slightly different from the last time we played; and 3. We know we have fun playing it.

As a bonus, many other games nowadays (like Lewis & Clark) include some kind of deck building mechanism. Why not first learn and master it with Dominion?

Join the conversation. Tell me in the comments what YOU think about Dominion.

4 thoughts on “Dominion: A Board Game Review”