If you’re in search of a fast-paced two-player game, then look no further than Odin’s Ravens.

While the original edition debuted in 2002, designer Thorsten Gimmler released this completely redesigned version just this year. Having won the “Best Strategic Card or Dice Game” category at the UK Games Expo 2016, I’d say it’s been a success. 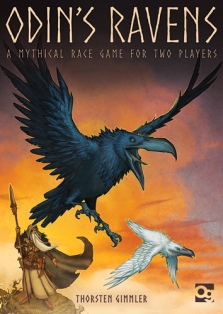 Unfortunately (and embarrassingly), my knowledge of Norse mythology is primarily based on the Marvel Comics movies (Chris Hemsworth, though, amirite?!). If you are in the same boat, please let me refresh you.

The only appropriate response to the above picture.
[Source]

Odin, also referred to as “Allfather” because he is considered the father to all the other Norse gods, is the multi-faceted god of poetry, magic, and war. According to legend, his unquenchable thirst for knowledge led him to sacrifice an eye (via self-gouging) in Mimir’s Well, whence he gained some sort of cosmic knowledge. Interestingly enough, you can see a replica of this well at the Brunk Children’s Museum of Immigration.

Another, more practical, way he gains his wisdom? By sending out his trusty ravens, Huginn and Muninn, to bring back news from across the world. 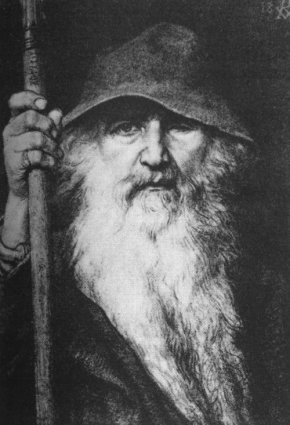 In this game, you and your opponent are those ravens, racing against each other to see who can return to Odin the fastest. However, to do so, you may need to enlist the help of the trickster god, Loki (who, I just found out, is actually Odin’s blood brother and not his son, as the movies would have us believe). Check out the section in that link entitled “Loki’s Role in the Pre-Christian Northern European Worldview” for an interesting analysis of Loki’s importance in the Norse mythology universe.

You’re a raven and you fly across the world to bring information to Odin. If you return before your opponent, you win.

The setup is incredibly simple and is shown in the following picture.

At the top of the picture is the stack of land cards. In the middle of the picture to the left are the two wooden raven figures, ready to race. To the right of those are 16 land cards. On the bottom of the picture are the black player’s 25 flight cards and 8 Loki cards, the rule book,  and the red player’s 25 flight cards and 8 Loki cards. The path the ravens must follow is a loop, meaning the white raven on top must go straight in front of him until he reaches the end of the row. Then he must go down to the other side of the card (in this case the forest) and circle back on his opponent’s side until he arrives back at the starting point.

Ravens start on the left side of the board and must traverse land cards. While there are 40 total land cards, they are shuffled and 16 are placed on the board. Players must make sure no two spaces in a row are of the same terrain (e.g., two fields cannot be touching). All remaining land cards are placed (in this case) on top of the board.

Below the land cards are each player’s decks. Both the black player and red player have two stacks: 25 flight cards and 8 Loki cards. Players draw five total cards for their starting hand. They can choose to draw cards from either or both piles. I’ve personally found it best to draw at least one Loki card.

An example starting hand includes four flight cards and one Loki card. Tom Hiddleston is a much more attractive Loki.

The nice thing about this game is that it’s pretty flexible in terms of what you can do, meaning you can play as many or as few cards as you can or want. That said, the basic actions you can take are flight or trickery.

To advance a raven, players must use flight cards that match the terrain of the next space on their route. If there are spaces of the same terrain in a row (which could only happen after moving cards around with Loki), a player can move his raven to the last card in the row, meaning the raven only uses one of those terrain cards to fly over all of that terrain.

For example, the black raven must play a desert card next. Since there are two desert cards in a row, he will only need to use one desert card to fly over both of the deserts in front of him.

If a player has no matching flight cards, he can use any two flight cards of the same terrain in place of the one flight card he needs.

Once used, players discard flight cards into a pile that will eventually be reshuffled back into play.

There are four types of Loki cards and each card has two different actions. A player can choose only one of these two actions. Once the action is taken, the card is removed from the game. This means each player can use up to eight Loki actions total throughout the game.

The four types of cards are shown below. Their abilities are fairly self-explanatory based on the drawings, but more explicit instructions are in the rule book. 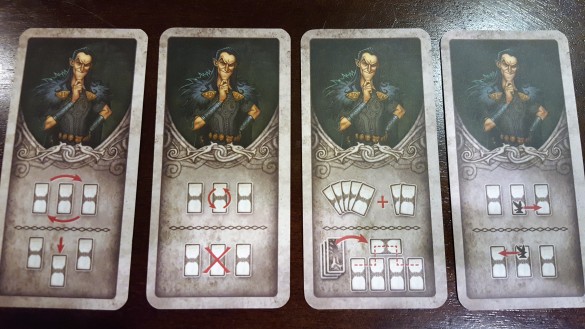 Here are all four types of Loki cards. A player can choose to use the top OR the bottom action. 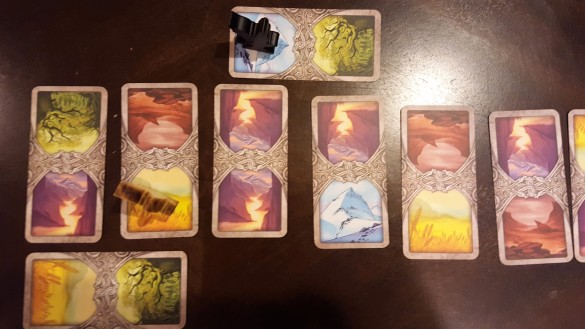 One of the Loki cards allows you to build a loop that elongates the route for the other player. For example, the white raven on the bottom is trying to move left. He must now play a forest card, a field card, and a fjord card to win instead of just a fjord card.

After you are done playing your cards and have discarded them appropriately, you must draw three new cards to end your turn. You can choose any combination of flight and/or Loki cards.

Note: you can never have more than seven cards in your hand and must immediately discard down to seven if you do. Remember, discarded flight cards are eventually reshuffled into play, but discarded Loki cards are not to be seen again!

The game ends when a player moves his or her raven into the final space on the opponent’s side. If that player went first, the other player is given a chance to move to the end of his or her track. In case of a tie, the player with the most cards left in hand wins.

Odin’s Ravens is engaging and approachable for all experience levels. It’s fast enough to play a few times in a night without growing tired of it, and is very easy to learn. So far, it’s one of my favorite games of 2016!

One thought on “Odin’s Ravens: A Board Game Review”