Burgers, pizza, beer, pop (cheers, Midwesterners), and lemonade. As an American food enthusiast, what’s not to like? 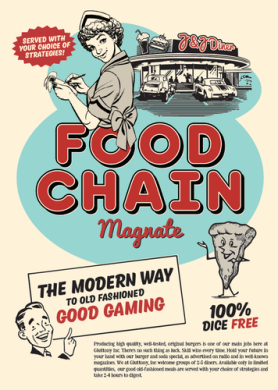 Food Chain Magnate (FCM) is a relatively new game, published in 2015. This is the first Splotter Spellen game I’ve played, and since the company has such a reputation for quality games, I was curious to learn more. Amazingly, especially given their success, designers Jeroen Doumen and Joris Wiersinga don’t even design games full time; it’s their night and weekend hobby. Doumen is actually a mathematics PhD and Wiersinga designs computer games to improve elderly and rehabilitation care for SilverFit. By their powers combined, they create notoriously complicated and component-heavy games. After all, their company’s front-page says, “Splotter creates deep, complex board games for strategy enthusiasts.”

It should come as no surprise, then, that my pre-play research concluded that FCM was rather involved. While looking past all the components and (millions of) cards scattered across the table can be hard, I found it to be pleasantly simple to learn. Which is a good thing considering that we decided to learn it at midnight one day. (Note: It is not recommended to start any game at midnight when you have a baby.)

P.S. Remember our friend Tony Boydell? He recently played FCM and posted about it on his blog.

Food Chain Magnate transports you to the artery-clogging diner era of the 1950s. In it, you are the CEO of a fast food company trying to out-maneuver and out-sell your competitors’ chains. To do it, you must hire the right mix of employees (from kitchen trainees to regional managers) to create an unbeatable production, sales, and marketing strategy. The game’s length depends on how long your fellow food chain magnates want to compete. The show is over when the bank runs out of money and the magnate with the most money wins.

Just as I mentioned in my Dominant Species review, this post is not intended to be a complete explanation of the game. It has far too many intricacies to do that justice. Instead, I’m just here to give you an idea of how it works so you can decide if you want to learn the rest on your own.

*The top-ranked games have ratings of ~8.3/10. That means this is one of the best games according to BGG (as of this publication, it is listed at number 90).

There are quite a few components you need to sort out before you can start. They are as follows. 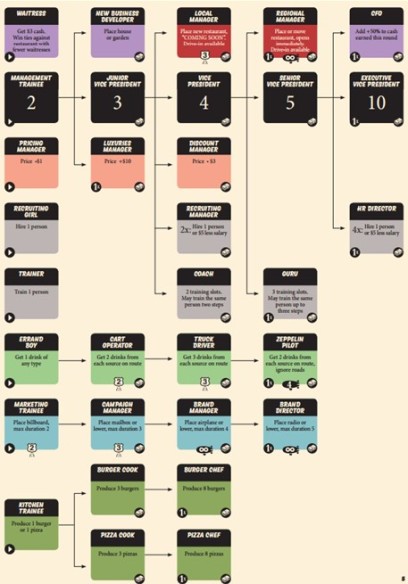 Our friend saw this genius idea on BGG. Instead of laying each card on the table (and taking up an insane amount of space), he carefully folded a piece of poster board to create just enough slots for each employee card. He even set it up so the hierarchy matched that printed on the player menu (as seen above).

This map is set up for three players. 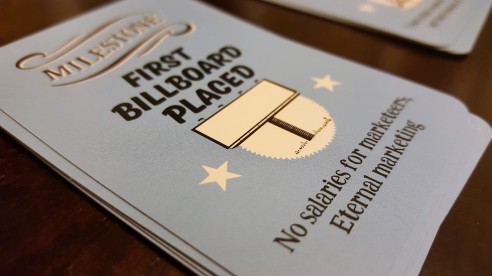 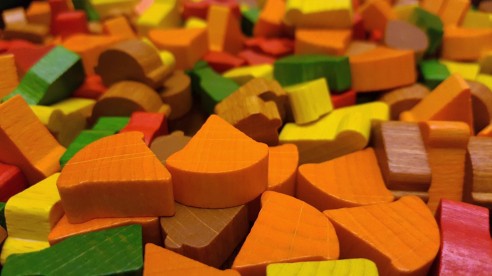 Alright! The map is out, the restaurants are placed, and players are ready to start swaying the feeble minds of the town’s citizens.

Okay, here’s where the going gets tough. Here’s a very simplified overview (if you can believe it).

This is when you secretly decide which employees you want to use during the turn. You are only able to use as many employees as you have open slots (the CEO, for example, has three open slots). This number may grow depending on who you hire and put to work. Everyone who is not working during a turn is on PTO (“at the beach”). During the first round, all players will only be able to use their CEOs. 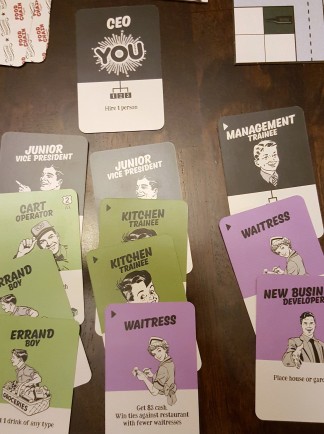 Mid-play corporate structure. I really took advantage of the extra spots that came with the junior VPs and management trainees. Those waitresses really came in handy, too, not only because they earn you money but they also help you win business.

This is where you take care of your operations.

I’d use this meme a million times if I could.
[Source]

Here’s where a lot of the juicy stuff happens because it’s when you find out if your carefully crafted plans have been thwarted by that no-good businessman across the street.

During dinnertime, the town’s citizens finally consume the food and drink they’ve been craving (because of advertising; these people have no minds of their own). Starting with the lowest numbered house, players determine which restaurants have produced the food and drink in demand by that house. For example if there are two beers and one pizza on the house, the restaurant needs to be able to provide exactly two beers and one pizza in order to sell anything to that house. Unless otherwise noted (like with a milestone card), each good sold is $10.

The first time the bank runs out of money, the reserve cards that were put aside in the beginning of the game are shuffled and revealed. The tallied number shown on the cards is how much money is added to the bank. The second time the bank runs out of money is when the game ends (but not before finishing up the payday phase and making sure all employees are paid for the work they do). Believe it or not, a tie goes to the person who went first in the most recent turn order.

Mid-play shot. Here you can see the goods I produced this round (three sodas), my corporate structure (I loved those management trainees!), and my milestone cards.

First, players must decide if they want to fire anyone (except for marketers who are out in the field). Second, they must then pay all employees who require a salary, including marketers in the field. Each salaried employee earns $5 during this phase.

This is where those advertisements persuade people to want whatever it is you advertised to them. Starting with the lowest numbered campaign (as opposed to house), players place the little food demand tokens on the houses that are within each campaign’s reach. Houses can only have three demand tokens on them and houses with gardens can have five. Therefore some houses may be full by the time a higher numbered campaign takes effect, rendering it (and your strategy) useless. 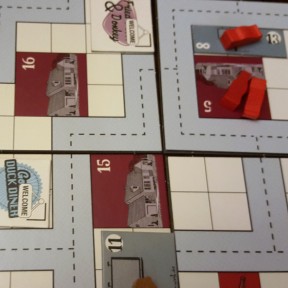 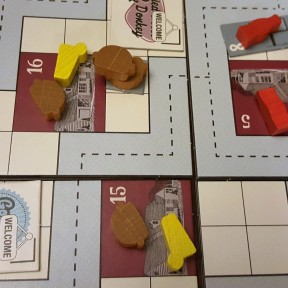 Here are some examples of houses and the goods they desire. On the left, house five wants exactly two sodas. Billboard marketing campaign 13 is active and eternally promotes one soda at the end of each round. On the right, houses 15 and 16 want exactly one burger and one lemonade. There’s an active burger mailbox marketing campaign that will last two more rounds.

During this phase, players must discard leftover food or drinks (unless they have a milestone that allows them to keep it), all employees go back into their hand, restaurants that are “coming soon” flip over to “welcome,” and milestones are earned and flipped over to signify that they are no longer available. Then the game repeats from phase one.

What game isn’t more fun when you walk away with loads of cash?

Since I won’t spend my time and energy reviewing a game I hate, it should come as no surprise that I would recommend playing this game.

Simply put, it’s very different from any other I’ve played and that alone makes me like it. Food Chain Magnate is simultaneously complex and simple and demands that each play is different from the last. Yes, it can be frustrating that the rich get richer, but that’s all the more motivation to be in the rich camp. It may sound boring when people listening in hear, “I’m going to train my management trainee to become a junior vice president,” but they don’t know what that junior VP is capable of doing!

I had been told that this is a game for “serious gamers,” but I don’t think that’s necessarily true. There is a lot of planning and thinking ahead, but it’s not so complicated that you can’t figure it out while you’re playing. I think it’d be better labeled as a game for “people willing to invest time and energy into a new game.” It’s not going to take you ten minutes to explain, but it’s also not going to take you an hour. Like anything else, you just have to start. It may be hard to find, but I suggest you go check out Food Chain Magnate and give it a go.

As always, I’d love to know what you think!

One thought on “Food Chain Magnate: A Board Game Review”