We just completed Rahm’s Little Readers, the Chicago Public Library’s summer reading program that challenges kids to read at least 500 minutes between June and September. In addition to reading, participants must complete two activities from each of the following categories: talking, singing, writing, and playing. Technically speaking, Baby Bear doesn’t write yet–or talk or sing much, for that matter–but luckily for him, his Mama Bear had some crayons and a strong grip to force his hand.

Nonetheless, when you read for at least 500 minutes, you end up repeating a lot of the same books. It’s necessary, then, to find books you, the reader, genuinely enjoy as much as your babe.

The following books are among our favorite right now, be it for their illustrations, text, and/or interactivity. Take a look and maybe you’ll find your next favorite, too! (See part one for more ideas.)

Brown Bear, Brown Bear, What Do You See? by Bill Martin Jr. and Eric Carle
[Source]

It’s only fitting that the first book on this list is a nod to one of the very things this blog’s name references. Eric Carle is undeniably one of the most beloved children’s book authors and illustrators of all time (he’s 87 now!). Fun fact of the day: Brown Bear was a collaboration. It was this book that actually kicked off his career in 1967, followed by the arguably more famous The Very Hungry Caterpillar in 1969.

Baby Bear and I started reading Brown Bear mostly because I liked it so much, but before long, I noticed that he’d reach for it on his own. He seems captivated by Carle’s signature bright and blocky illustrations (much to my chagrin, he wiggles in excitement every time we land on the damned purple cat) and eagerly turns the pages to see which animal is next. What’s especially fun is when he points along on the last spread as we recap all of the animals.

Who wouldn’t love Curious George in finger puppet form? Baby Bear sure does, and has been grabbing George’s little monkey hands for as long as he’s known how to move his own.

With five brightly colored pages of pat-a-cake rhymes, from the classic “baker’s man” verse to an appropriately themed “yellow hat man” one, babies can’t help but to smile and clap along. This is a great diversion book, too, having stopped at least a few crying fits in this household.

My First Slide-Out Book of Colors 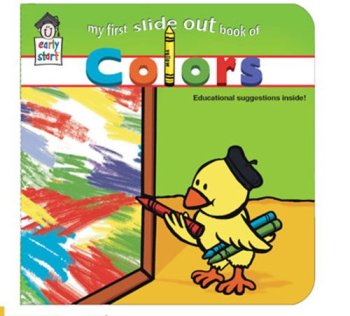 No, the text in this one isn’t exactly Newbery material, but it’s straight-forward and easy for even the youngest listeners to understand. Each page shows a color followed by two objects of that color. A third object is shown in black and white until the reader pulls out its corresponding tab and its color is revealed. For example, “This is the color yellow. The chick is yellow. The taxi is yellow. What color is the banana?” When you pull out the tab, you learn that the banana is yellow! Good job; you’re getting the hang of it!

Just recently, Baby Bear has become a little obsessed with pulling out and pushing in each tab. Every time we read it, he is engrossed to the point where he actually wants to flip it back and start over. At this pace, this kid is going to know his colors early!

What I also like about the book is that it contains ideas for the reader to encourage more interaction so the book won’t grow stale. The orange page suggests pointing to and discussing each image in addition to talking about the color (e.g., “What do you do with a carrot?”). It’s always helpful to have new ideas like this.

Where Is the Green Sheep? / ¿Dónde está  la oveja verde?

We have quite a few bilingual books, but this one is my favorite. Depending on how long I need to or can occupy Baby Bear, I typically read it all the way through in one language, then start over in the other. The illustrations are simple yet whimsical. The sheep in the story aren’t just any old boring sheep, either. There’s a sheep in the bath, a Singin’ in the Rain sheep, a surfing sheep, and even an astronaut sheep! “Here is the wind sheep. And here is the wave sheep. Here is the scared sheep, and here is the brave sheep. But where is the green sheep?” or “Esta oveja juega con el viento. Y esta oveja juega con las olas. Esta oveja está asustada y esta oveja es valiente. ¿Pero, dónde está la oveja verde?”

My only complaint about the book is that the English version rhymes but the Spanish one does not. While I appreciate a straight translation, I would prefer the content to be changed slightly enough to make both versions equally fun to read aloud. Either way, this one is in our diaper bag at all times.

As you can tell, Baby Bear is really starting to enjoy interacting with his books. This one is a particular favorite because it has the baby trifecta: flaps to lift, textures to touch, and a mirror at the end.

Each page begins with, “Peekaboo! I see…” along with a picture of an animal hiding behind its hands. The reader must lift the flap to reveal what animal is hiding and what kind of kisses it offers. For example, “Peekaboo! I see…furry puppy kisses.” As a bonus, said furry puppy has a nice, soft patch of purple fur for baby to feel.

Babies pick up on rituals, and, as such, Baby Bear has started to preemptively cover his eyes/forehead before each new page. It’s adorable.

Quick as a Cricket 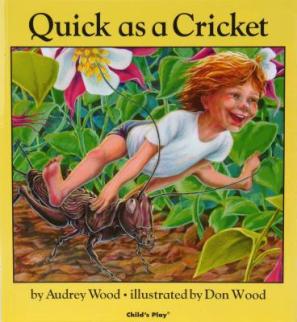 Baby Bear received this book for his first birthday, and it’s quickly become one of my personal favorites to read to him. Self-described as a “joyful celebration of self-awareness,” Quick as a Cricket uses contradictory animal similes and beautiful illustrations to capture the many dimensions and colorful imaginations of children. My favorite stanza (and corresponding imagery) is, “I’m as brave as a tiger, I’m as shy as a shrimp, I’m as tame as a poodle, I’m as wild as a chimp.” Plus, Baby Bear’s version came with a cool personalized touch: his aunt wrote the Spanish translation on each page. Thanks, Aunt B!

I mean it when I say that Little Blue Truck is a great read for children and adults alike. It’s short enough for Baby Bear to stay engaged but long enough to develop a thoughtful arc about the old golden rule and contains language that’s extremely fun to read aloud.

“Little Blue Truck came down the road. ‘Beep!’ said Blue to a big green toad. Toad said, ‘Croak!’ and winked an eye when Little Blue Truck went rolling by.” You’ve no choice but to enhance your animal noise skills if you read this enough.

I also enjoy this book for its illustrations, which evoke in me a Norman Rockwell-esque nostalgia for the countryside I didn’t know I had. 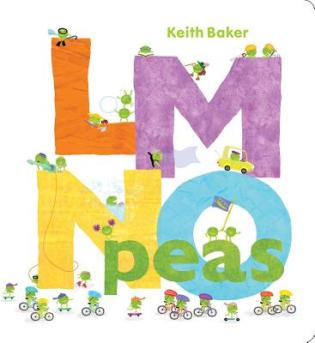 I’m passionate about this book because it is exceptionally playful and creative, an alphabet book like no other. Perhaps the most talented and diverse group of peas in existence scatter across these pages to teach kids the ABCs.

“We are peas–alphabet peas! We work and play in the ABCs. We’re acrobats, artists, and astronauts in space. We’re builders, bathers, and bikers in a race.”

Not only are these fun rhymes to say aloud, but the illustrations are surprisingly detailed and clever, too. Who would have thought two peas roasting marshmallows could be so cute? In what is an outwardly simplistic book, I find something new and equally entertaining each time we read it. This book earns a Baby Brown Bear Golden Star.

At some point in the near future, I may need to admit to a slight children’s book hoarding problem, but I’m not there yet! What are your favorite children’s books?